Out of the Shadows popped onto our radar this last week out of nowhere with a fantastic line-up all backed up an incredible mission.  Focusing on bringing darkwave and similar music to Portland, the festival is now in its fifth year and will be taking place over three days (April 4th-6th at the Tonic Lounge) and is a fundraiser for the progressive X-Ray.fm radio station and Trans Lifeline, a support center for providing critical resources to the trans community.

Making darkwave a way to help mobilize support for a transgender community under siege by the far-right in the U.S. does more than just raise money: it creates a physical space that declares right up front that it is queer and trans inclusive.  We caught up with the organizer Dave Cantrell to ask about the festival and why it is important to build open LGBT support in the darkwave and post-punk scene. 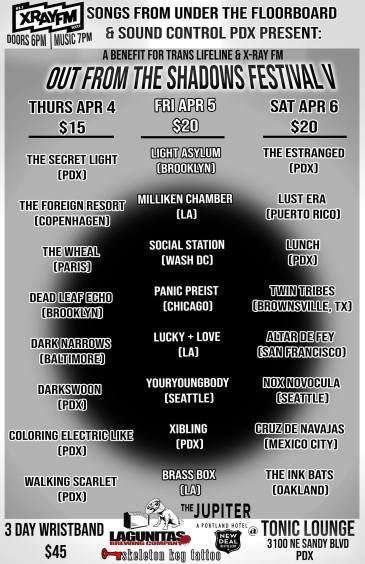 So first, what got you started doing the festival, and how has it grown since you started?

Out From The Shadows (OFTS) began in 2015 as on outgrowth of Songs From Under the Floorboard, the post-punk/darkwave radio show I host on XRAY fm here in Portland. The local scene was blossoming so dynamically that it seemed a good idea, and the right time, for an event bringing everyone together to both give exposure to the bands and to, in a way, celebrate what was happening. That first event was just a one-night affair with seven local bands, one from Olympia and one from Vancouver B.C., but the reception was enthusiastic enough to propel it into becoming a yearly event. Word kind of got out and I started getting requests from bands from out-of-state, which, in turn, made me realize this could work on a bigger scale so I began inviting bands from around the country and beyond, at which point year two became a 2-nighter and in 2017 it became the 3-night festival it is now.

How did you get connected with Trans Lifeline, and why is it important to you?

OFTS has been a benefit since the beginning. All proceeds beyond paying the artists, the venue, and whatever other ancillary costs, go to the beneficiary, which for the first three years was XRAY, a progressive, non-profit, listener-supported community radio station. Beginning last year, however, I decided to incorporate a co-beneficiary from the local or local-impacting community of LGBQTIA organizations, due primarily to the fraught political environment we all now find ourselves in, but as well because both my daughters are gay and much of the darkwave community itself, both here and pretty much everywhere, locates themselves somewhere along that spectrum. As for how I got connected to Trans Lifeline, there was an article about their efforts in the local alt.weekly (Willamette Week) and, y’know, the light bulb went off.

Why is it important to create an inclusive space in the darkwave scene?

Well, for one because all spaces should be, by definition, inclusive, but since that is not always the case, it’s of course important to provide safe environments for those that, simply by identifying as ‘other’ in some way, continue to feel imperiled in the broader society. And the fact that there’s been a notable regression in this regard since the 2016 election makes it all the more crucial. But anyway, for the most part, punk and its off-shoots have always been a place for self-identified outsiders to find safe harbor. One of the aspects of OFTS that’s most rewarding, actually, is the atmosphere that permeates the festival. It’s not unusual to tangibly feel a kind of electric joy in the room. That alone is reason to keep it going.

‘Out of the Shadows V” is hosted by XRAY’s Songs From Under the Floorboard radio show and Soundcontrol PDX and will be held on Thursday, Friday, and Saturday night at the Tonic Lounge (3100 NE Sandy, Portland)

Check out a few of this year’s bands on Bandcamp!