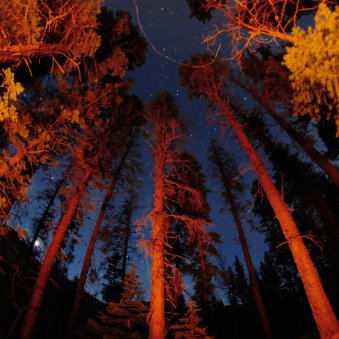 There is a world of neofolk music so indebted to subtlety and emotion that it almost sounds as if someone tapped in to the slow hum of the forest.  Within this world there is the trend towards the single-vision solo project, often done with intense introspection and a nod towards its own meditative quality.  The solo project is an often under-rated mode inside of genres, often seen as a “side project,” but it has the ability of really exploring the extremes in its lack of group compromise.

This may be why the project Evergreen Refuge resonated so much with us, because it does not seek to placate its audience.  Instead, the long, nature inspired tracks force the listener on a journey, longer than most, and with a lot of unpredictable mountains to cross.

We interviewed Evergreen Refuge recently about what really drove this incredible musical diversion from the norm, and how their radical animism and antifascist is at the heart of this solo journey.

So can you tell me how this project started?  Is this your first musical project?

Evergreen Refuge was born initially out of a desire to express feelings and thoughts I’ve had while in the wild and as an outlet for spirituality regarding nature. As with all music projects I begin, I also wanted to make music that I wanted to hear. It is not really my first project, though it’s certainly the first “fleshed out” project. My first foray into music was actually in much more of the electronic and ambient music world.

How do you define your music?  It is incredibly varied, sometimes ambient, sometimes uses folk traditional music, sometimes descends into industrial noise.

You know, that’s funny actually. Like you mentioned, Evergreen Refuge albums vary quite a bit in their “genres”. Though there is definitely a base of “black metal” throughout a number of them, I feel very much on the outside of black metal. I feel more, at its core, that Evergreen Refuge is an ambient project that incorporates elements of folk music, black metal, and post-rock.

The first thing that will strike people is the long, paced, songs.  Why have you chosen to do these long orchestral tracks?

The long songs are an attempt to invite the listener to be immersed within the piece. When I listen to music, I oftentimes prefer to sit down and give an album my full attention, when possible. Each album is supposed to offer some introspection or reflection for the listener, just as it does for me as the creator, albeit in a very different way. I also write music in this manner. Evergreen Refuge pieces are conceived as one track that has been created over the course of up to several months.

How do you think your project relates to the larger neofolk scene?

In the beginning I was definitely inspired by a handful of neofolk or dark folk artists, especially the ones that expressed a deeper connection to the natural world. Being somebody who has always identified with the more “pagan”/animistic philosophies, I was initially drawn to neofolk that had these aspects as well. In addition, There are some elements to what I make that could possibly be labeled as “neofolk”. It is a genre I have felt part of but not really, similar to black metal, like I mentioned previously. 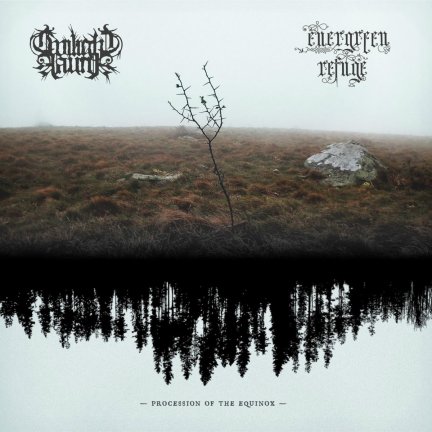 I loved the collaboration with Twilight Fauna, can you tell me a bit about how that came together and what the goal was?

Paul has been a dear friend–hell, he’s been family–for years now. We have had a deep connection and have collaborated on a few things, including our project Arête. We kind of decided pretty spontaneously to do that split together. I believe the label that put it out, The Fear and the Void, first reached out to Paul about it. They wanted it to be their first release. Paul had this idea of making pieces kind of based around the changing season and how it connects to us. I had been meditating on the ideas that became the basis of my piece, “Light Seeker, Dawn Bringer”, since the previous yule and decided to channel that into the music. I have had a pretty firm stance on only doing splits with people that are good friends. This is for a number of reasons, but one of those is just that to me a split is kind of intimate. It’s an interesting way to forge a bond between two or more people, which I think was certainly true with that split in particular.

Do you feel like antifascist and revolutionary politics runs deep in the music, if a little hidden from its outward face?

I am a political person and my art is deeply political too, despite it being instrumental music. Although my music may not express political messages per se, it’s almost always informed by politics in a way. A lot of musicians tend to shy away from revealing their politics or taking a stand these days, and I find this bothersome. I am not necessarily interested in telling people what to think, however I am firmly against oppression and I’d rather be up front about it in a way. I am not interested in having fans who are complacent in the oppression of the ones I hold dearly. These days especially, I think people need to be standing up for what they believe in. I guess if you truly believe in what you say, you ought to actually stand up for it.

Why do you think it is important to be a public antifascist musician?

Art is a breeding ground for politics of all kinds, whether people want to believe that or not. There is a tendency within black metal (and neofolk) circles to talk about being “apolitical” and whatnot, yet it seems more and more nationalists are drawn to black metal and neofolk. I think there’s some correlation here. People don’t seem to realize that the “apolitical” claim draws people with sketchy politics in because they can use it to hide behind. In addition, it’s not “just politics”. Some of the political views I’ve witnessed people having in circles like these have very directly harmful implications to the people I love. So, of course I believe in taking a stand on that. Because I believe it’s a real problem. It’s not role playing. People seem to forget that. And, like I said, neofolk and black metal circles these days are quite volatile politically. I have grown pretty tired of artists not taking a stand. These days, I am more drawn to bands that make a stand and am more likely to listen to a band that is up front about being against oppression. I know I’m not the only one who feels that way.

How does pagan or folk spiritual practice inform the music?

I am very guided by my own spiritual practices, and Evergreen Refuge is part of as well as the result of those practices. My beliefs fall in line more with animism and buddhism, rather than anything traditionally “pagan”, though it does fall under that umbrella in a way. I guess I am not at all interested in any worship of “gods” or anything like that. Each piece I do is the result of my own personal spiritual experiences but I try to leave it open for interpretation, so that others may connect with it in ways that are more along their spiritual path. Like I said, I’m not really interested in telling people what to think, per se. However, each album has a central meditation and I hope people spend time to connect with it in a way that helps them along their own personal journey. The world is so horribly sick finding connection with the earth and each other is incredibly important now more than ever. I hope my music can bring some light into this world.

What’s next for you?

I am always working on something, be it with Evergreen Refuge or the many other projects I have. I will say that I somewhat recently completed the recording of a new full-length. It is quite a bit different, being entirely acoustic and pretty minimalistic. I am extremely proud of it though and it definitely represents a new chapter for Evergreen Refuge. It will be some time before this sees the light, due to the fact that I just released a full-length on the equinox. I also recently completed a piece that I am very excited to share, hopefully by winter. It will be part of a split, I am hoping. But I won’t say much more about it just yet. Despite recently releasing the tenth full-length for this project, it is still very active for now. The future beyond that, as always, is uncertain.

We are putting several tracks from the Evergreen Refuge Bandcamp below, and included their collaboration Twilight Fauna above.  We will be adding tracks from the Evergreen Refuge/Twilight Fauna collaboration to the Antifascist Neofolk Playlist on Spotify!  Please add the playlist anyway, there are great newly added tracks on there and we will be adding more regularly.