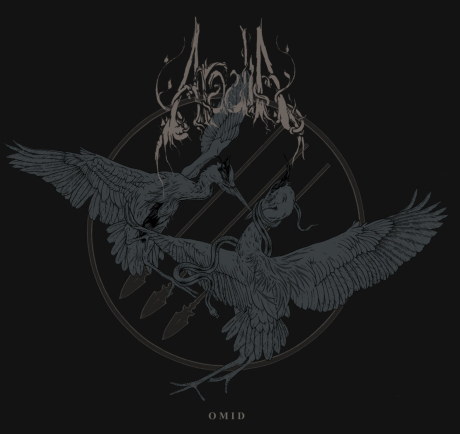 “We live in capitalism. It’s power seems inescapable. So did the divine right of kings.”

It is quote from anarchist sci-fi writer (and Portland resident) Ursula Le Guin that the neofolk/dark folk/genre bending band Aradia starts their epic album Omid.  Carried by a driving tension built by strings and backed by prominent drums, Aradia drops you right into a sound that feels much more lyrically and conceptually present than a lot of the neofolk bands that do their best to stay in the background.  The cello plays its own character in Aradia, one of the defining features of neofolk’s drive to bring back orchestral instruments into a rock formation (maybe this is what post-rock was always about).

The intensity of the strings almost lends itself to metal, but the acoustics of its draw more on contemporary strings with a meloncholy edge that has to be seen live.  We were able to interview Brenna from Aradia’s current line-up and talk about the band’s history, where its influences come from, and its commitment to militant anti-fascism.

How did your band come together?

Wretched of the Earth and Strangeweather played a show together to benefit the Law and Disorder conference…I believe. At the last Red and Black cafe on SE Oak (A former anarchist co-op coffee shop that is no longer around). At least from Strangeweather’s perspective, we were really pumped to meet WOTE and hear what they were up to. I remember telling Sean, the bassist, they sounded like Warscroll, a band I love. Shortly thereafter Angel and Sina got in touch with me about trying out some cello on their new “ambient metal” project. We’ve played in lots of different configurations over the years. Right now there’s only two of us, there’s been a total of seven people involved through the life of the band.

Does spirituality play into your project?

For me music is spiritual, it engages a part of our beings that is really ancient and complex. It’s an old way of being with other people in a spiritual way, singing together and making sounds together. A lot of the political content of what we write is definitely spiritual. We sampled Audre Lorde talking about her death and about what we leave behind, who we have been in the world as artifacts. To me this is all tied into a spiritual way of looking at struggle.

What bands inspired you in doing the work?

How did you develop your sound, and how do you define it?

It’s always been really collaborative. We’ve sounded pretty different depending on who has been playing with us. At this point I think it’s basically experimental arrangements for guitar and cello. Our last album had some dark folk moments, some anarcho-punk moments, some minimalist metal moments…our first album was a little more d-beat leaning I feel. I think that had to do with our line up at that time. We’ve always been influenced by various traditions of music such as Balkan, Persian, Middle-Eastern, Armenian, Celtic, etc.There was a time I thought our string arrangements could be classified as “romantic” in the musical sense, but our very musically educated viola player Maria informed me that they were more accurately described as “contemporary.”

How did the region you were in (the Pacific Northwest) play into your music?

There’s a long history of grunge, riot grrl, punk, and other DIY music in this region, and that’s a big part of why many of live here or what brought us here years ago. One thing about being in the NW nowadays is we get paired with with metal, “apolitical” neofolk, and/or post rock bands. This has been challenging as our political grounding is more in the punk community, and we’ve gotten a lot of feedback that when we play these kinds of shows they don’t feel accessible to everyone.

Anticapitalism is right up front in your tracks, including in the samples used, why is that so present?

Well, it’s a force of crushing oppression in our lives, in the struggle of the planet and the human soul,  and art arguable should shine a light on what’s keeping us down. There’s a lot of apologism for capitalism in our culture and I like normalizing the open acknowledgment of it as a major problem. That being said, we know it can come off as a trope. I think most of us who have been in the band came from an anarcho-activist background of some kind so it comes naturally to frame things from a place of anti-capitalism.

There seems to be a strong spirit of resistance in the music, not just lyrically but in the way that folk music is made so vibrant.  Do you see this project as inherently tied to politics, or collective liberation?

We hope so. I recognize the tendency to conflate being in a political band with actual activism, and I think it’s important to see that they are different. BUT the way you move through communities, the types of shows and benefits you play, the kind of spaces your music creates, the projects you lend your sounds to, that all factors into being part of a musical and political community. For me, at the end of the day, Aradia is a music project and we hope to inspire folks who are in struggle. Knowing the role music has played for me personally in developing political consciousness makes me believe that it can have an impact.

There is a huge variety, it moves from frenetic synth inspired tracks to very slow and plotting melancholy sound, do you feel like you are constantly reinventing your sound?

We write really slowly so it follows that over time, as our line up changes and what we are listening to at the time, our sound changes.

What drives your commitment to antifascism?  Have you experienced a lot of white supremacist attitudes in the pagan and neofolk scene?

I think realizing how flirtatious the white metal-centric music scene in the PNW can be with fascism made us want to be more out about our politics, especially when we were put on bills with people who we felt were sketchy. We don’t really roll in the neo-folk/pagan scenes, but because of the cross over with my other band Strangeweather that was more present in that scene, we have ended up playing some shows with bands who are more in this scene. Sometimes it just seems like heavy music with strings in the PNW gets put into the neo-folk category, even when that’s really just not what we’re doing.

Our commitment to anti-fascism comes from our values and the historical significance of anti-fascist movements.

Why do you think it is important to be a publicly antifascist band?  How does antifascism inform your music?

In today’s world I’m not sure how anyone could justify not being antifascist. To me it seems like lots of people thought antifascists were self-important hyperbolic social justice warriors, and then events such as August 2017 Charlottesville, VA started happening and suddenly folks knew what the fuss was about. And it is connected to a long history of struggle against real threats that still exist…in terms of music I guess I hope we inspire the parts of people that defy that authoritarian, coercive, xenophobic current that leads to fascism….

What other social issues play into your music?  There is a strong sense that rebuilding community, something more bonded, in your music.

It’s cool to hear how much meaning you’ve gathered from our music. As political as we are as people I think a lot of what we do is very aesthetic too, not in a shallow way but in a nerdy, emo-artsy way. We have written material about the micro/macro cycles of despair and hope, as well as solidarity with displaced peoples.

We are doing a short tour in UK, Netherlands, and Belgium in June. We are hoping to release a recording as a two-piece in the next couple months.

What other bands do you recommend for antifascist neofolk fans?

All the bands I listed above. Disclaimer that I was never that into neo-folk: A Stick and A Stone, especially their album The Long Lost Art of Getting Lost. Cinder Well‘s latest album The Unconscious Echo had some heavier moments. Byssus, a new project out of Santa Cruz, CA.  Anna Vo. Also Crone, a short-lived crust-metal band from Minneapolis circa 2015.

Aradia currently has two albums on Bandcamp, 2018’s Omid and their 2015 4-track demo.  Unfortunately, Aradia is not yet on Spotify so we can’t add them to our Antifascist Neofolk Spotify playlist.  We are putting both Aradia albums below and are looking forward to the new release coming this year!