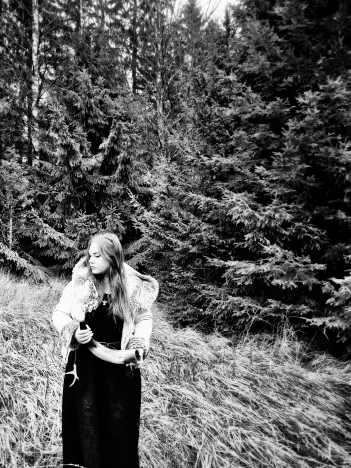 Seidr is the Nordic tradition of shamanism, to draw wisdom from the Gods through ecstatic rites, maybe meditation, maybe enhanced consciousness, walking the line between madness and clarity. The revival of Nordic Folk bands like Wardruna and Heilung has hailed a whole subgenre of neofolk that tries to revive the emotive music of the Vikings, and Finish neofolk artist Amanda Aalto’s solo work is one of the most surprising breakout examples of the year. Drawing on the traditional folk styles of the North, she moves towards ecstacy rather than archeological fidelity, and each track feels like it could either prefix warfare or celebration.

We interviewed Amanda Aalto about how this project came together, how the Northern Tradition informs her music, and how her music is a visionary process trying to break free.

How did you start making music?

That’s a good question yet, I am not sure if I know the answer. I have been writing songs as long as I can remember, ever since I was a child I would come up with some silly songs by myself. I think writing songs and making music is such a big part of who I am that it’s impossible to tell exactly how it started, it probably just happened one day.

Is this your first project?

No, not really. I started by playing in bands when I was about 14 years old, mostly heavy metal and rock. I still wrote some stuff for myself but started my solo project only about 7 years ago.

How does song writing work? Do you have a set process or does inspiration strike a number of ways? What’s the step by step?

It varies. Usually I sit in front of my piano and come up with a melody, which I start to work on more. Then I continue to vocals and lyrics, usually this happens quite fast, from like 15 minutes to an hour. Then, when I have the whole structure of the song, I record a demo and start adding more stuff to it, more instruments and such. This is how it usually works, but I like to try things differently as well. On ‘Ríkr‘, which is my latest solo album, there are a couple of songs which I wrote in the wilderness in Norway when I was camping last summer. That was something I’ve never tried before!

Do you have a number of collaborators even though this is your solo work?

I always like to collaborate with other musicians, so yes I have. Some have evolved to projects, some have been for one or two songs and so on. I feel it’s always a privilege to work with other musicians and artists because that’s when you usually learn the most about songwriting and producing.

Your music draws heavily from the well of traditional folk music and Norse traditions, where did you learn about these traditions?

Oh yes, well this whole folk thing is a bit new for me as a musician but I have been into folk and neofolk for a quite a long time now. I’m a bit drawn to darker side of things so finding bands like Wardruna and Heilung really opened my eyes as an artist and a songwriter. When I listened to their (and other similar great artists’) songs it felt like home and something that I’ve always wanted to do but haven’t really known how to do it. After that it’s been a really inspiring journey learning about old traditions and old instruments and I know there is still a lot to learn. I have always been interested in shamanism as well, so that plays a big part in my songs as well.

What role does tradition play into your songwriting process?

It has a role, yes. Sometimes more and sometimes less. Not sure if I understood the question the right way, but if tradition here means respecting the old ways yes, I like to write this kind of music sometimes even outdoors or lighting candles and such. It is a ritual for me, for sure.

How does Nordic paganism inform your music?

It has quite a big role in my lyrics, I have to say. I was raised as a Christian but always felt more drawn to paganism, not meaning that I worship the Old Gods but I do have a respect in the old beliefs and they interest me a lot. Still I like to leave things open and let the listener to decide what goes on in the stories of my songs.

What bands have been most influential?

Well, mostly Wardruna, Heilung, Dead Can Dance and Danheim. At the moment.

Have you faced any white supremacist attitudes in the neofolk scene?

Personally I haven’t. I have heard that this kind of stuff happens though which is very unfortunate.

Why do you think it is important to stand up to racism and fascism in the music and pagan world?

It is always important to stand up against racism and fascism, I think. It’s sad to hear that these things are involved with this genre and with my music I wish to send a message of equality and respect between all people.

What drives your music most?

Feeling. Being free. Or wanting to be free.

What instruments are you using?

For songwriting I use piano (or sometimes guitar), then for recording I have bowed lyre, shaman drum, other drums & percussions, flutes and I am planning to rent a harp for next album, but we’ll see.

How does recording take place?

Well I have a very small and humble home studio where I like to play around. I like to be free with the recording schedules and doing things my own way so it works for me quite well at the moment.

What role does your native Finland and its natural landscape play in the music?

It definitely has a role alongside with other Nordic mythologies and traditions. On ‘Ríkr’ there are two songs with lyrics from Finnish folklore tales ‘Kalevala’ and ‘Kanteletar’, both really old poems and they were fun to work with, I have to say. In Finland we have always been very close with the nature and forests so that theme can be seen in my lyrics quite often as well. I hope in the future I can learn more about these traditions and bring them more into my music as well.

What is coming next for you? Any new releases, collaborations, or tours?

A lot of things! I am working with my next solo album which should be out some time next spring. Before that I am releasing two singles, ‘Mustan Parantaja’ (hopefully coming out in January) and ‘Pohjola’. I have also got a band together around this project and we have gigs coming up next spring and summer, so looking forward to that as well! I have also a new neofolk collaboration project ‘Járnviðr’ and we are releasing our first EP ‘Manatar’ shortly.

What other bands would you recommend for antifascist neofolk fans?

Vetten Runotar (my other band), Crown Of Asteria, Uumenet, Lovi. For starters!

We are embedding Amanda Aalto’s new album Ríkr as well as tracks from her last two albums, and we added several of her songs to the Antifascist Neofolk Playlist on Spotify.