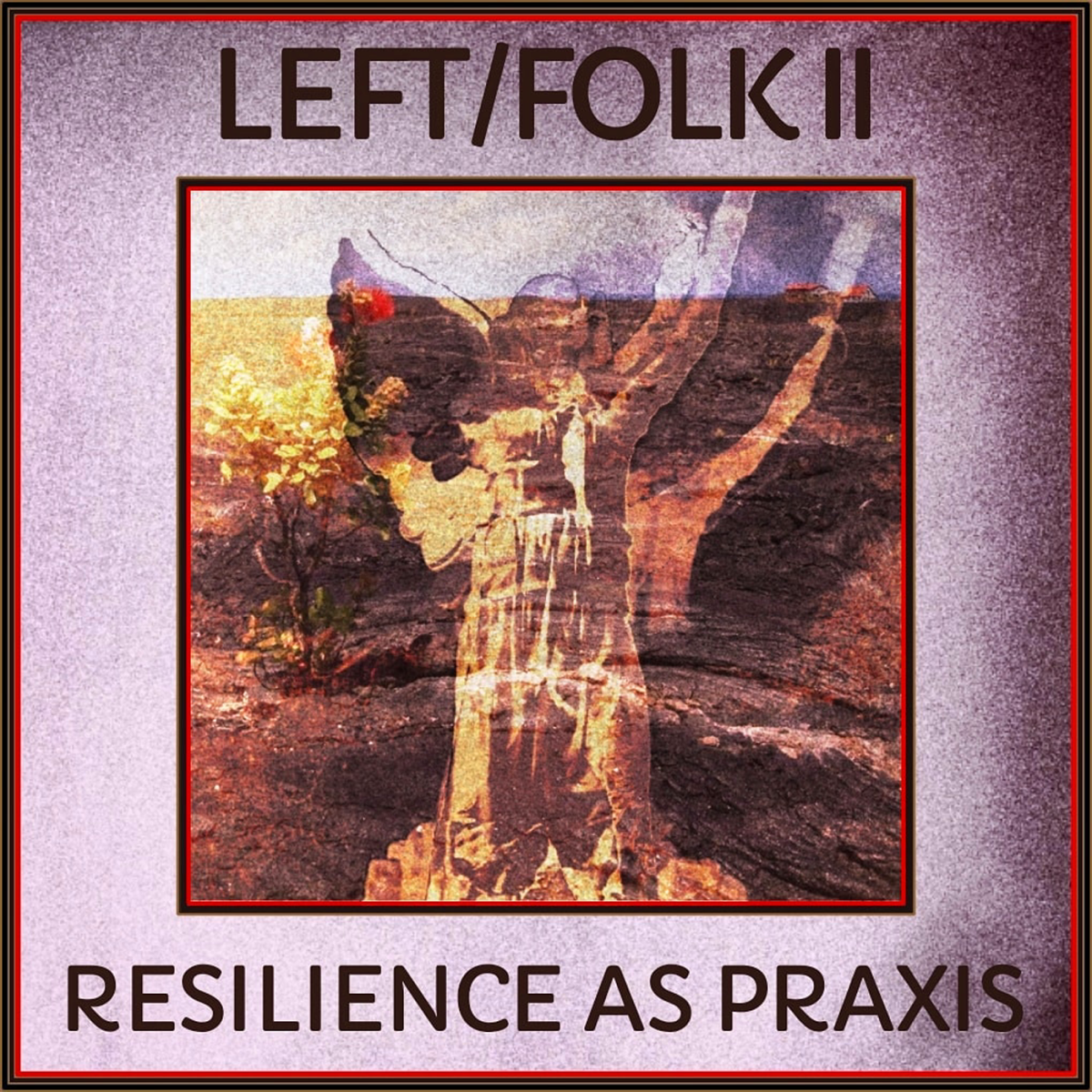 LEFT/FOLK II: Resilience As Praxis is an international effort towards building Left/Folk (antifascist neofolk) as an aesthetic movement and a means of collective action. Exploring themes of liberation, spirituality, struggle and resilience, this compilation comes from a multitude of ultra-personal experiences and features songs of vulnerability and indignation.

The collection ranges from a more traditional neofolk sound to the farthest reaches of post-industrial experimentation, encompassing the harmonious and the dissonant at simultaneously. The album is a show of evolution and growth for the music and the artistic possibilities within the trajectory of Left/Folk music, and draws upon the tradition of post-industrial music.

As we collectively face harsher and harsher worldly conditions, a result of climate change, weaponized mismanagement and endless capitalist greed, we must uplift one another and celebrate the resilience found in our experiences and the experiences of our communities. Resilience, to predators and the state of the world, is praxis and serves as a source of strength for all who are wrapped up in the daily struggle of life. Whether we face individual  or wider societal hardships, we can draw upon the longevity of our passion and desire for existence as a means of strength and inspiration. Another world is possible, another world must be possible, never give up on that.

Proceeds of this compilation will be donated to The Kurdish Red Crescent (Heyva Sor A Kurd) to assist in their efforts against the global pandemic (give them access to the damn vaccine!) and those who are caught in the whirlwind of violence being propagated by the surrounding State powers like Turkey and their surrogate militias. We stand in solidarity with the Kurdish people in their struggle for autonomy and recognition, and believe in the Rojava project as a beacon of hope and possibility for a better world. 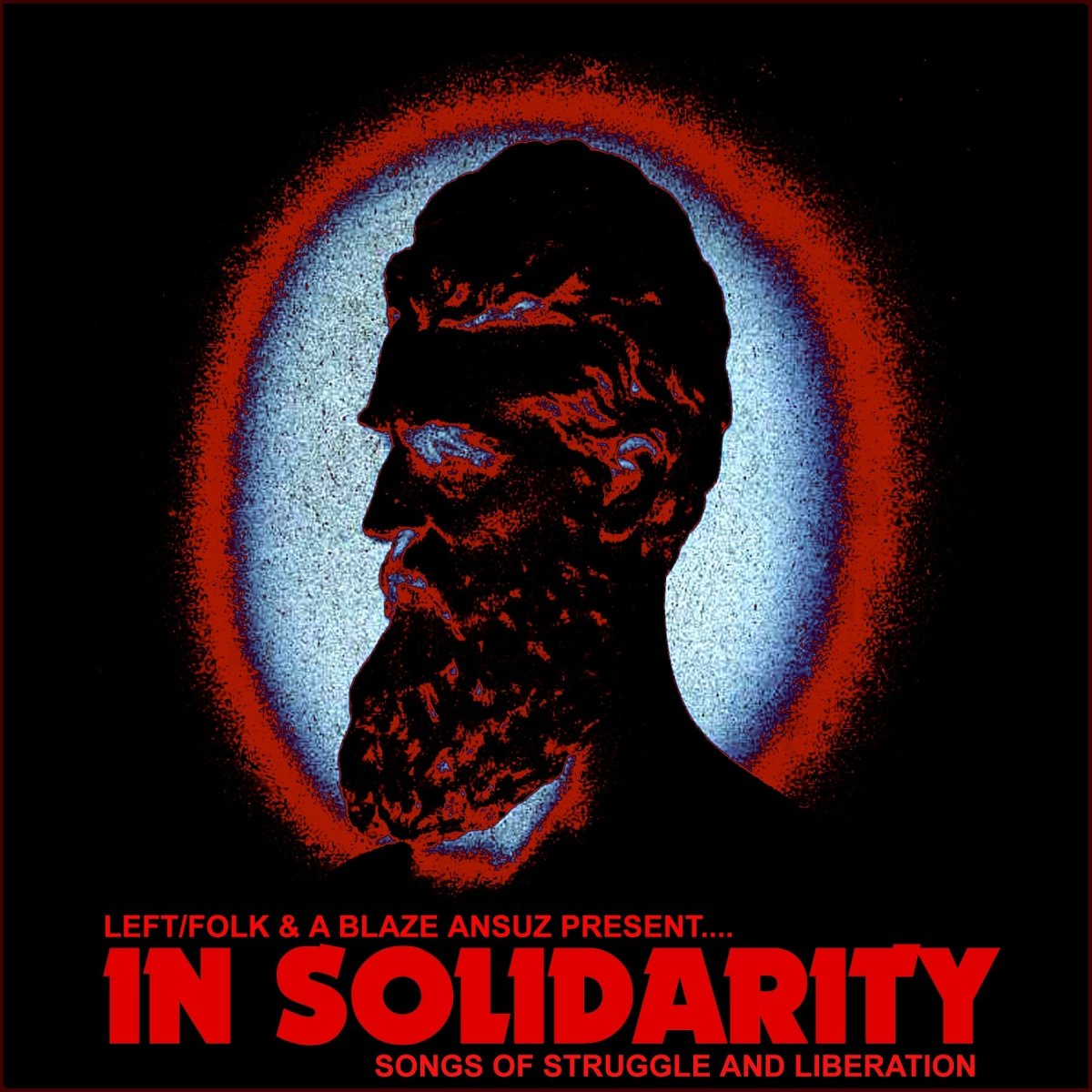 We are happy to collaborate for a project from the Left/Folk collective, pulling together antiracist and radical neofolk musicians in a project to raise money for the Black Lives Matter National Bail Fund. You can buy the album directly on Bandcamp or you can send over your receipt for a donation directly to the National Bail Fund.

IN SOLIDARITY: Songs of Struggle and Liberation puts together a motley crew of Left/Folk (antifascist neofolk) artists from across the Americas and across the ocean for a great cause. This compilation of songs, curated by the Left/Folk collective in collaboration with A Blaze Ansuz, is a showcase of artists working within the post-industrial/neofolk aural tradition without compromise to apolitical and far-right influences within the neofolk scene. The music on this compilation ranges from lyrically driven folk to mythic and cinematic instrumental pieces, always bridging the gap between these forms of music and a wide range of leftist political traditions. The artists on this compilation are uncompromising in their political ideals and their creative integrity. These are folk songs for the struggles we face in 2020, a logical evolution of protest folk music merging with post-industrial music culture. With artwork featuring images of abolitionist John Brown and symbols of militant international cooperation, this compilation is a signal to those who are navigating the complicated musical landscape of this era that another world is possible… a world that is willing to face injustice and push back against the sociopolitical corruption that is coagulating into fascist movements across the planet.

The time is now, not later, as the social clock marches toward midnight… the light of liberty grows ever dimmer. Left/Folk is a call to action and an establishment of an alternative future, through contextualizing the past and identifying the present. If you are reading this, it is likely that you are aware that neofolk has a long and sordid history of far-right implication, complacency, and infiltration. Left/Folk seeks to change this paradigm, to shift both perception and intention in a direction devoid of such elements. Left/Folk is in many ways, a logical synonym to antifascist neofolk. It is a pointed identifier, that divorces the pursuit of neofolk from the baggage of neofolk, without ignoring the cultural history or purging the music of its own aural character or revolutionary potential.

The Left/Folk collective recognizes this in the context of what we are seeing as a growing chaos in the streets, and an amplified show of force by the State that feeds off this polarization. As society in the US is in freefall, as protesters and press are beaten and arrested in the streets, as the people cry out for justice, it is becoming clearer and clearer that to be inactive is to be complacent. Folk music has long been a vehicle for political ideas, for change, for affirmation, for action. In 2020, we are faced with the necessity to act, in any capacity, even if many people are relegated to distanced, quarantined measures of mutual aid. Violence in the streets, repression in our communities, and continuous acts of protest are all part of the political atmosphere. Art must reflect this brutal reality; it is no longer time for pretending it is not there. Until we exist in an equitable society, until it is truly established that Black Lives Matter, and that we refuse to live in a police state.

Proceeds of this compilation will go towards The National Bail Fund Network in support of Black Lives Matter and ongoing protests in the struggle against systemic racism and State repression. When members of the press and citizens practicing their rights are targeted by the police, beaten and arrested in droves, we cannot stand by in silence. The National Bail Fund Network is a national project that works with organizers, advocates, and legal providers across the country that are using, or contemplating using, community bail funds as part of efforts to radically change local bail systems and reduce incarceration.

IN SOLIDARITY: Songs of Struggle and Liberation becomes available at midnight, officially, October 2nd via leftfolk.bandcamp.com for #bandcampfriday