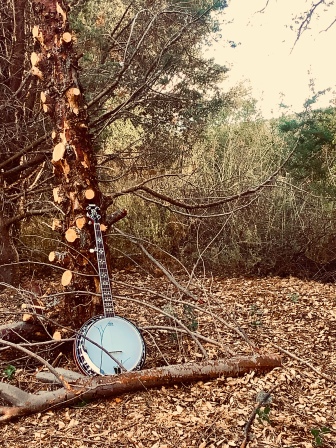 The Portland based neofolk duo Ashera evolved very consciously out of the explicitly antifascist neofolk trend that has been perc0lating (and we have been encouraging). There is an intentionality to this, to refuse nationalism a place in romantic post-punk and to allow for a romantic revolutionary music of our own. We interviewed them earlier when they released their first singles “1,000 Dead Fascists” and “Capitalism Must Burn,” but then dug in even deeper with them on this latest release. There are a lot of questions about how this thing known as antifasicst neofolk is going to develop, and they are trying to stand in front and draw a line between the complacency of the scene’s past.

Why is antifascism front and center in your music? Why is it not good enough to just be a non-fascist band?

This moment that our society and our world is currently in is too important and too historic for us to be fence sitters and appeasers. The situation that has developed within the neofolk music scene is a microcosm of that. Fascists have taken over the scene. If the rest of us don’t speak up and act out to counter that—if we aren’t explicitly antifascist—then we are enabling fascism and conceding important ground in the struggle.

When the fascist creep is on the march and we can all see it gaining ground, then you are either explicitly anti-fascist or else at the very best you are actively choosing to enable the existence and the spread of fascism within this music scene and within our society. At some point someone must draw a line in the sand. That was done with the creation of antifascist neofolk.

What do you think radicals are missing by not engaging in art, spirituality, and romanticism?

As people who are skeptical of institutions of wealth, power, and religious doctrine, and as labor and social justice organizers in our communities we can understand the overwhelming sense of realism, mechanism, and historical materialism—the angst and anxiety of immediate economic necessity, social, and philosophical upheaval in which we can so easily get bogged down. But there is so much about the human experience that we miss out on when don’t take time to dream, when we don’t make room not just to appreciate but to engage with and actively cultivate art, spirituality, and romanticism in our lives and in our society.

We are both skeptical people, and Justin is an atheist. But when we see and hear our favorite music performed live, when we dance with hundreds or thousands of other people who are feeling the same ecstatic emotions created through a shared, live, interactive, tactile-audiovisual experience, we get a rush of adrenaline and emotion that is hard to describe as anything other than a spiritual experience. It’s an experience that fuels our own creative urges, our own music, our own will to dream.

On a societal level, when we don’t allow ourselves the room to play and have fun, to write stories, to romanticize and mythologize our histories and our lived experience—when we don’t create our own fables to tell our children with moral lessons in equity, anti-colonialism and anti-racism, in the ethics of radical cooperation, mutual aid, and antifascism, when we fail to engage in dreams of a better world and to create real or imagined utopias with beautifully diverse, just, and equitable communities—then the left and our movements are bound to lose. Then we are devoid of a very large and important part of the human experience, and we can be sure that the forces of fascism and other forms of reactionary authoritarianism will fill the void with songs and mythologies of national superiority, racial supremacy, and making America great again in the service of imperialism, wealth, and power.

How do folk traditions play into your music? Do they inform your politics in any way as well?

The whole bardic tradition and its modern singer-songwriter form has always inspired us. We love songs that aim to tell stories. Music is storytelling through melodic, harmonic, rhythmic sound. Music is poetry and auditory art that prompts us to feel, that explores the human condition and the whole range of possible emotions that we navigate in our late-stage capitalist society. Music is the expression of our dreams, our aspirations, our history. Music is the sharing of stories among people and across space and time, from one generation to the next. In that sense music is both folk tradition, and at the same time it is an expression and vital vehicle for the transmission of folk tradition.

As people who love storytelling, we both have a long fascination with folklore and mythology, from comic book superheroes to tales of ancient goddesses and gods. The cowboy consumerism and militantly blind patriotism of white-U.S. culture can be more than a bit vapid. So we binge watch TV shows about people with superpowers and we delve into ancient stories about magick and faery folk to try and connect with our past, with something larger than ourselves that is fantastic and inspiring. For both of us our first bands, and in some sense our lives as music artists began with pagan neofolk music that was rooted in a particular mythology, folklore, and spiritual tradition that we were both a part of, and which is where we actually first met. Through this new and modern incarnation of a presumably ancient spirituality, we hoped to find something in neopaganism that would help us connect with not just our cultural ancestry, but with the pagan ancestral roots shared in common by all cultures around the world, as well as provide us with a spiritual framework that—we hoped as pre-capitalist and pre-Christian—wouldn’t be as racist and patriarchal in nature as the religious tradition and culture we grew up with.

This tradition of covens that we were part of teaches that there are five magickal arts: agriculture, natural medicine, astrology, dancing, and music. So those of us who were musicians would get together and play folk music with guitars, flutes, mandolins, banjos, dulcimers, and bodhráns. We would provide music at seasonal rituals and other celebrations, and eventually we formed a band on the side called  Cloverfields that played at pagan festivals around Southern California and spawned other future bands that we were both a part of.

But in addition to music and storytelling, another important folk tradition that we learned in part through neopaganism, a tradition that is important to our music and very much informs our politics is the folk tradition of resistance. Communities of rural and working class people have always been at the heart of resistance against institutionalized wealth, power, inequity, and hierarchy. That tradition of folk resistance goes back thousands of years and beyond to the slave revolts of antiquity, to resistance by common, rural, and indigenous folk around the world against forced conversion to Christianity, and more. In communities that practice neopaganism, at least here in the U.S., there is a strong sense of shared resistance against the patriarchal Christian juggernaut that upended our ancestors’ old way of life, that replaced and destroyed so much of our cultural heritage, an institution that has so deeply shaped and distorted the modern world we live in today. We practice the folk tradition of resistance to fascism, racism, patriarchy, hierarchy, and authoritarianism in our churches and our spirituality, in our schools and in our sports stadiums, in our places of work and our governments, in our streets and through the folk tradition of telling stories with music.

Neofolk is heavily infiltrated by fascists, what can we do to change that dynamic and remove them for good?

We don’t know if we can remove fascists from neofolk anymore than we can remove them from society in general without becoming one of the things we most despise as antifascists, genocidal authoritarians. But what we can do is resist them, shut them out, make them irrelevant in the neofolk music scene. We can send them crawling back into their holes.

To do that we need to cultivate an “everyday antifascist” value and attitude within the neofolk scene. That means we need more neofolk bands and artists to make statements that are explicitly antifascist if not in the content of their music and art, then at least in its other aspects. Refuse to perform with them. Refuse to book them. Refuse to record with them. Refuse to give them your money and your time. We can take this genre back by boxing out bands and artists who use romanticism and the mythologizing of our past to fuel white supremacy, immigrant hysteria, and fascism.

But if we do want to have any hope of truly defeating fascism, then we can’t just be against fascism as a reactionary default. We need to purposefully carve out space to be romantic, empathetic, passionate and emotional in the expression of our everyday antifascism. We need to find and create our own cultural mythologies rooted in the values of antifascism. We need to have bold visions and share our dreams with each other by writing antifascist poetry, singing antifascist songs, and telling stories of utopias built in the empty pockets of violent empires. We’re beginning to create it here in Portland with a strong antifascist presence at protests and the cultivation of everyday antifascism in our organizing spaces throughout the city, with the amazing antifascist displays, banners, flags, group chants and renditions of “Bella Ciao” at Timbers soccer games. We are beginning to create that here with music too, with the cultivation of Pacific Northwest antifascist neofolk. We can take back neofolk and make this scene a space that is as much explicitly antifascist as it is romantic, artistic, passionate, and visionary.

We have added Ashera tracks to the Antifascist Neofolk Playlist on Spotify, and are embedding their new album from Bandcamp below.