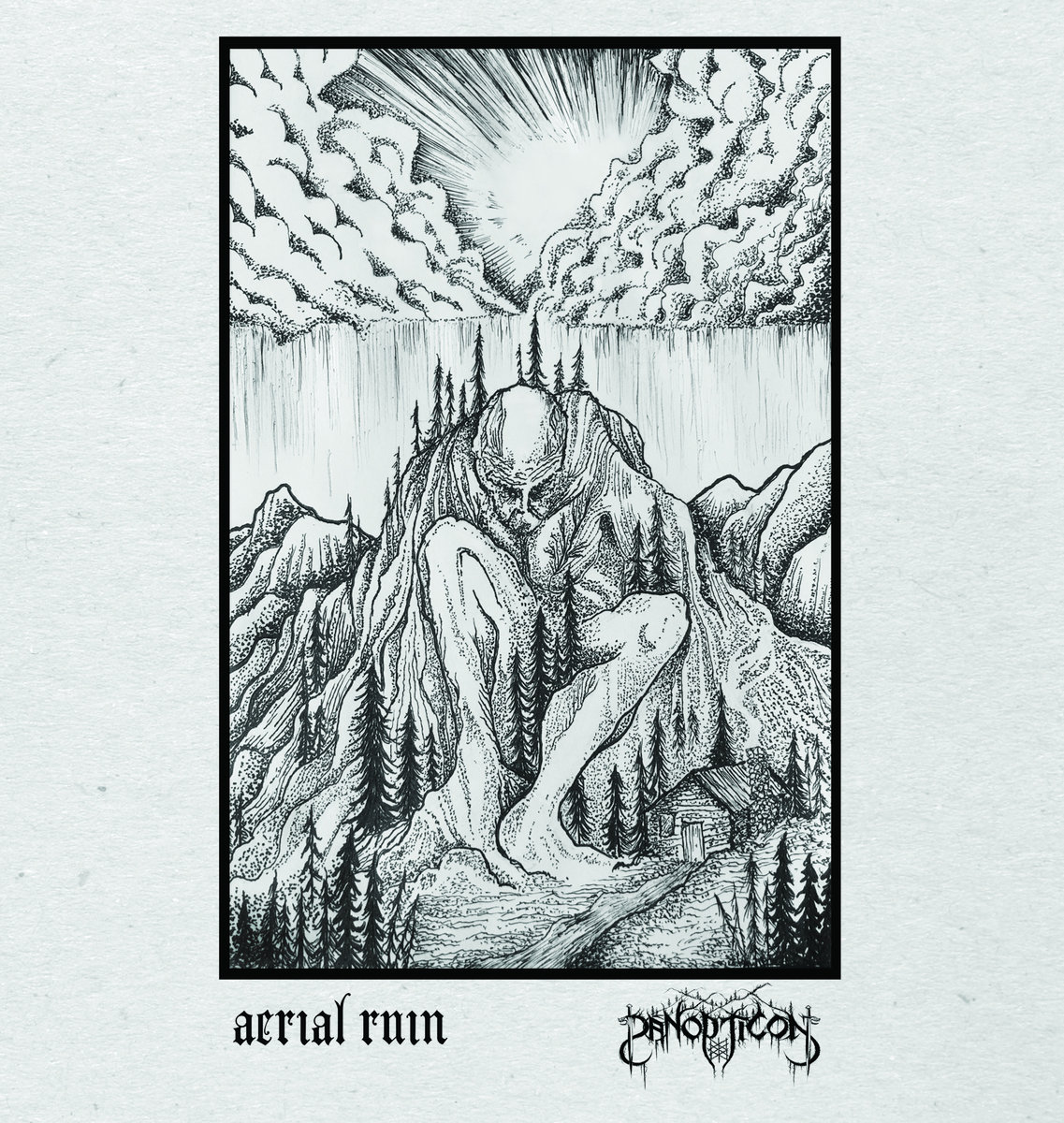 Two of our most championed musicians, Aerial Ruin and Panopticon, have released a preview of a brand new nine-track split on Bandcamp just in time for Yule. This is acoustic-leaning hill music, complete with the regional folk charm both are known for (This may be Panopticon at their most neofolk).

Check out the two tracks that are available to now (one from each) and pre-order the rest of the album, to be released on January 31st, 2020.

There is a sonic simplicity to Aerial Ruin, the solo neofolk project by Erik Moggridge, also known for his work in metal bands like Epidemic and Bell Witch. Like with a lot of layered neofolk, it starts with a singular acoustic guitar and then paints tracks with an overwhelming cascade. It is uniquely of the Cascadian neofolk scene that it comes out of, where you almost expect the mountains and forests will inspire this kind of quiet introspection (or blood curdling black metal, but that’s the other side).

We interviewed Moggridge about how Aerial Ruin came together, how Cascadian neofolk is growing in the Pacific Northwest, and why there should be no question when it comes to racism in the scene.

How did you first start playing music?

I started playing guitar quite young and had a band in junior high playing Sabbath and Priest covers and then started my first proper band Epidemic with friends in high school. We were thrash/death metal band that had some underground demo success and eventually did two albums on Metal Blade in the early-mid nineties.

What led into Aerial Ruin?

After Epidemic I formed another metal/rock band (which has recently reunited) called Old Grandad in San Francisco. We were much more experimental than Epidemic and had melodic and harsh vocals performed by all three members. We had a lot of different styles including more melodic psychedelic Pink Floyd influenced stuff that I would sing. You can see a thread from that material to Aerial Ruin although the two projects are very different overall.

This feels like an intensely personal, and solitary endeavor.  What is the core inspiration for your music?

In some ways it could be said that Aerial Ruin grew out of becoming a more spiritual person. And yes it is a solitary and personal project but in a sense it is sub-personal, as it could be said to be about the loss of the self, or the fine line between the intensely personal and vaporizing the ego .

I have always been a very detached and dreamy individual and as a result have gravitated towards altered states of consciousness and extreme psychedelic experiences coupled with a fascination with death and mortality. My agnostic spiritual perspective gave way to a series of intense spiritual experiences. Not religious mind you, more of an impossible to define but very strong connection to something that eclipses our conscious human experience that it perhaps stems from. After that experience metaphor and symbolism took on new strength and meaning to me and I started writing and recording the earliest Aerial Ruin material as an attempt to express all this.

Of course experiences of transcendence and spirituality have always inspired art and music. What is magical to me is how unique and individual a perspective can feel on something that is perhaps so universal. Every individual can see or perceive something from a perspective that only they hold.

Dynamically it also made sense to do something quiet, minimalistic and personal where my voice does not have to compete with a hugely loud drummer and ever expanding amplification that Old Grandad had.

How do you define the sound of Aerial Ruin?

I usually quote other people by saying “some people describe it as dark folk” or “it’s acoustic guitar and melodic vocals but it’s dreary with residual metal qualities”. I don’t really have a definition for it myself outside of “my mostly-acoustic solo project”.

The term folk music to me implies the continuing-of or inspiration-from tradition. So in a sense that does not describe Aerial Ruin as my inspirations are so detached and personal. But I like folk music and there is enough sonic similarities that I don’t feel it is a bad description when people describe me as folk, dark-folk, neofolk, freak-folk etc. People who enjoy these genres often like my music so it is helpful to talk about it this way.

Is there a growing neofolk scene in the Pacific Northwest?

There are a number of talented musical projects oriented around acoustic instruments like Novemthree, Disemballerina, Solace, Vradiazei,  Serpentent, Cinder Well, Weather Veins, Crooked Mouth, Ekstasis, Weoh to name a few. I’m not sure how many of them would consider themselves neofolk though.

What bands have inspired this work?

Syd Barrett and Mark Lanegan are definitely influences. I think the musical influences were much more obvious in my louder bands though. I am an absolute Elliott Smith fanatic but I became a fan after Aerial Ruin started so his music is not really an influence but definitely and inspiration. The same could be said for certain Cat Power albums – the 1998-2003 era. Radiohead too. In more recent years I have discovered lots of more underground music that may not be a musical influence per se influence but is definitely inspiring, I’ve listed many of these bands elsewhere in this interview.

Why do you think it is important to stand up against racism and fascism in the music scene?

It is always important to stand up to facism and racism. I am thankful that the people I have met in the underground community, both here at home and on tour are consistently anti-fascist, anti-racist and embracing of all kinds of diversity. Of course sensitivities differ but musicians I know seem to be, as a whole very left wing, distrusting of authority and completely intolerant of any form of discrimination or prejudice.

These days I tend to discover new music through touring and playing shows with bands and don’t always pay attention to what’s going on in the larger scene. Obviously I am aware that facism and racism do exist in the music scene but they are not in my record collection. It is alarming to me that white supremacy and racism are emboldened here in the US by the absurdity of the Trump era but thankfully I do not see this manifested in the underground circles I move in.

The next release is a fully acoustic split full-length with Panopticon coming out on vinyl courtesy of Bindrune Recordings. It has just been mastered so hopefully it will be out in a few months. Panopticon is such a brilliant and unique one-man band and  I am honored to be able to share wax with him. The way he and I approach acoustic music is also very different so the two sides are an interesting contrast.

In September I begin recording a collaboration album with Seattle doom-duo Bell Witch. I have been an auxiliary vocalist/collaborator on all their albums and select live shows and tours but thus-far have only contributed to certain songs or parts. On this album I am singing, co-writing and also playing guitar on the whole thing. This  is why it is being presented as a collaboration by Bell Witch and Aerial Ruin as opposed to me just being listed as a guest vocalist like before.

On September 28 I begin a European tour centering around a show hosted by BE Metal at Amuz, a beautiful church turned concert hall in Antwerp, Belgium. It is a great line-up featuring Austin Lunn playing solo acoustic Panopticon songs, Don Anderson playing Agalloch songs also solo on acoustic guitar, plus Andrew Marshall of Saor, Kathrine Shepard of Sylvaine and Marisa Kaye Janke of Isenordal all doing acoustic performances. After that show Aerial Ruin will be doing touring through France and Switzerland with Iffernet, a new two-piece black metal band featuring David, the drummer from Monarch and Sordide. The vinyl version of my “Nameless Sun” album came out recently as a split release by Caustic records and Musica Maxica so this tour will allow to get my copies of this which I look forward to. in 2020 I plan on touring heavily as Aerial Ruin and hopefully in collaboration with Bell Witch as well.

What bands would you recommend to an antifascist neofolk fan?

We are going to share several albums from the Aerial Ruin Bandcamp below, and have added to tracks to the Antifascist Neofolk Playlist on Spotify.